Sites I love, Things I mention 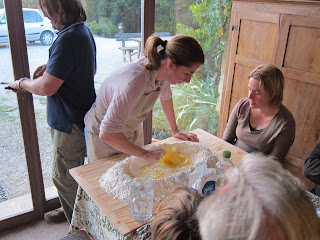 On Thursday after our wine tasting, we returned to Cretaiole for a class on how to make Pici, the local pasta, followed by a group dinner.
Let me just say that I am normally not a fan of trips where groups activities are organized, partly because normally when we take a week-long vacation, we like to just relax and keep to ourselves a bit, but at this time in our trip, it has been fantastic to have all these pre-decided group activities to attend.
Everything is voluntary, so nobody has to participate in anything they don't want to, but it has been really nice after so long by ourselves, to take part in things with other people. And as I have mentioned, Isabella, Carlo and Luciano have been wonderful. They are so energetic, passionate about sharing their lives with us, and about sharing what they love so much about this part of Italy.
Plus Luciano has been the best Italian teacher I could ever have had. He speaks slowly, using the simplest of words, always brings his dictionary, corrects me occasionally in the gentlest of ways, and most of all, he lets me make mistakes. As long as he can understand what I'm trying to say, it's all right if I've used the wrong conjugation or agreement. Especially since I can only speak in the present tense! But as long as I clarify today, tomorrow or yesterday, we're ok.
Anyway, back to the pici class. Pici, as I mentioned, is the local pasta, and it is kind of like a very long, very thick and chewy spaghetti. Pasta in Italy is a whole different animal to what I have tasted in The States; thick and chewy, cooked in water with a whole lot of salt. Isabella laughed at us Americans when we said we cooked pasta with no salt or a pinch of salt. She said you need "a bunch" of salt, and that if salt was so bad for you everyone in Italy would be dead. I have to say, she has a point there.
To make the pici, Isabella dumped out mounds and mounds of flour, and then scooped it out to make an oval wall of flour. Into the middle of this well she added a dozen eggs, water and olive oil. The original poor peasant recipe contained only water, but now they add eggs. The oil was added for us amateurs, to make the dough easier to work with.
She then blended the eggs, oil and water, while incorporating flour from the sides of the wall. The biggest challenge with this part, she said, is not breaking the flour-wall too early and having eggy water pour all over your floor.
After a little while, the mess of liquid and eggs became more solid and she was able to break the wall and incorporate the rest of the flour. Then she started kneading the dough in a way that of course looked simple, but once she partitioned the dough into four sections and gave us a try at kneading it ourselves, proved to be difficult. 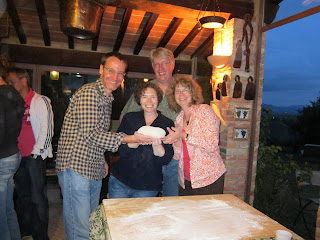 Here we are with Phil, Ellen, and our dough baby. I'm afraid this might be the only baby our parents get from us!! Once the dough has reached the right consistency, it is pressed down into a slightly flat oval, then strips are cut. Holding the strip the left hand, you take your right hand and begin rubbing the palm across the dough, hard, while moving to the left. This is supposed to yield long, round strips of pasta, which are then coiled loosely, dipped in cornmeal to avoid sticking and placed in boiling water.
This is, of course, easier than it sounds, and to get a uniform length of pasta is almost impossible. We wound up with think, fat worms, or strands so thin they broke as soon as we picked them up, or lengths of twisted pasta link coils of rope.
In the end, however, they all tasted delicious. Isa boiled them and served them with her pasta sauce made from veal, beef, tomato paste, onion, carrot and celery ( I think that's what she said was in it), and Carlo grilled us up a massive amount of home-made sausage and ribs.
They were the most delicious sausages and ribs ever. The thing I've learned the most about Tuscan food is the simplicity of everything. Most dishes contain only a few ingredients, intended to highlight each ingredient rather than obscure. So bruschetta is simple bread and tomato, sometimes with basil or rubbed with garlic. RUBBED with garlic, not drowned in 15 cloves so that you can't taste anything else.
Pasta dishes are super simple as well, not overburdened with sauce, and often just sprinkled with pecorino and pepper. The sausage Carlo made contained meat, fat, salt and pepper, and nothing else. The ribs were just ribs, sprinkled with a lot of salt and rosemary.
Starting a meal with bread, olive oil and balsamic vinegar? Doesn't happen. I haven't even seen balsamic here. The bread is made for dipping in the sauce of whatever else you've eaten and that's it.
And the pasta here, so much better than any I've had anywhere else; so dense and chewy, even the dried pastas are better. I don't know why it's so different. Is it the amount of salt in the water? The cooking time? I will have to experiment at home.
Posted by J. ROSE at 6:01 AM